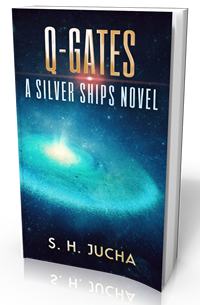 Outpost One: Resistance, the peacekeeping station in alliance space, is mired in political turmoil and dangerous conditions from the Colony, a race of giant devouring insectoids. Commander Jess Cinders and Admiral Lucia Bellardo fight the troubles besieging the outpost from multiple directions.

Sand serpents, Usaanans, are suspected of undercutting outpost contracts, necessitating Major Sam Fleetfoot investigate the source of their production. His time on the Lemgart’s home world, with Lieutenant Candace Weller, progresses through a series of alien contacts. When the Usaanans are exposed, the sand serpents attempt to eliminate the human pair.

Meanwhile, Chief Engineer Mickey Brandon and his teams, led by the SADEs, investigate the Messinants domes. Their aim is to duplicate the ancient race’s technique of transporting individuals and goods through quantum-linked platforms, called Q-gates. The teams produce requests for console inputs that stymie them and lead to cataclysmic events.

Omnian Co-leader Alex Racine’s mysterious dreams turn into nightmares, and he fears for events in alliance space. The dreams herald multiple calamities, such as the loss of the Transit Tripper. The freighter, carrying an alien drone from the Worlds of Light, was sent to Mickey to examine.

To make matters worse, the Colony has escalated its tactics against the Resistance. The alliance defenders, having had a modicum of success, recently suffered setbacks. Jess must add to Mickey’s tasks, requesting the chief engineer find a way to defeat the Colony’s new energy weapons before more lives and ships are lost.

(Read an excerpt from Q-Gates, A Silver Ships Novel.)

On Amazon in ebook and print versions.

The MP3 and CD audiobook versions available on Audible.