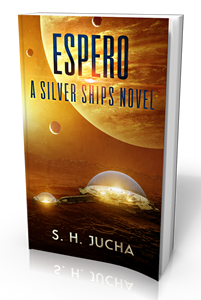 Trouble infiltrated the Harakens’ capital city of Espero, in the form of New Terra criminal gangs who grew wealthy and powerful on the moons of Ganymede, hiding behind the cover of an ill-conceived mining charter. The gangs brought stims and addictive, hallucinogenic drugs to Espero to spread among young Harakens and visitors to the planet.

Christie Racine and her friends visited a hidden club rumored to be distributing the dangerous drugs and ran afoul of the criminals running the illegal establishment. Kidnapped and transported out of Hellébore’s system aboard a space freighter, the girls became desperate to find a way to free themselves.

Alex Racine, Christie’s brother and president of the Harakens, races to discover where the girls are taken, and the trail leads him from Espero to the pleasure domes of Jolares, a moon orbiting a gas giant in Oistos, the New Terrans’ home system. Alex’s search is complicated by the discovery of not one, but three sets of pleasure domes, each on its own moon and run by its own criminal mastermind.

It’s a dangerous game of hide-and-seek, as the Harakens seek to recover their girls and locate the biochemist who created the dangerous hallucinogen, without panicking the kidnappers. The Harakens’ efforts are complicated by the duplicitousness of "Mr. Blue" and "Sniffer," two gang leaders, who seek to steal the domes of "Craze," the third gang leader, in a dangerous double-cross.

Alex and his people thought things couldn’t get any more complicated until they discover the gangs have gone to war with deadly stunners and plasma rifles in a fight for possession of the Haraken girls, who are caught between the rivals. (Read an excerpt from Espero, A Silver Ships Novel.)

MP3 and CD audiobook versions available on Amazon and Audible.