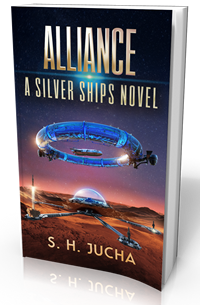 Olawale Wombo and a small contingent of Omnians are sent to assist Earth to uplift its technological prowess. With the aid of the incomparable SADEs, advanced tech is transferred to the Sol Enclave, the system’s governing body.

After Sol’s construction of Tridents, Omnian-designed warships, Earthers possess the ability to transit quickly among the stars. The desire to know what happened to Earth’s colony ships sent to the stars a millennium ago is resurrected.

The two outcomes of colony ships are known. They gave rise to Méridien and New Terra, which Sol’s previous government, United Earth, had the misfortune of trying to subvert. Now, Earthers want to learn the fate of a third colony ship, the Honora Belle.

An Omnian Trident and the Rêveur, the liner that launched Omnian leader Alex Racine toward a destiny he couldn’t have imagined, accompany three Sol Enclave Tridents in search of the Belle’s colonists.

Swiftly, the Omnians and the Earthers are enmeshed in a centuries-old conflict enveloping a vast area of space inhabited by the alliance races. The enemy is the Colony, a race composed of two giant insectoid species. They’ve progressed from usurping domes, the alliance gateways between worlds, to arriving in force to overtake an alliance home world.

Olawale Wombo must decide whether to abide by the expedition’s original purpose or help the embattled alliance races. He asks himself one question: What would Alex Racine do? He knows the answer to that question. Every Omnian knows the answer.

(Read an excerpt from Alliance, A Silver Ships Novel.)

The MP3 and CD audiobook versions are available on Amazon and Audible and narrated by Grover Gardner.